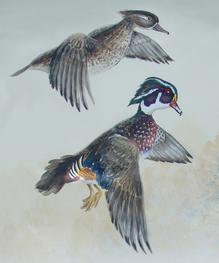 Western Mass Duck Hunters is a member of the Hampden County League of Sportsmen.

Twenty clubs comprise the Hampden County League.   (                               )    Each club sends a delegate who represents their club's interests at the League's monthly meetings and reports back to the club's members. Of special interest is that the Division Of Fisheries and Wildlife's District Manager Ralph Taylor personally presents the Connecticut Valley District Report for the month. The club delegates can interact with Ralph in areas of interest that pertain to their club. This is an opportunity for our club to be heard by the Division of F&W.

Additionally each County in the State sends a League representative to the State Sportsmen's Council meetings. This gives the leagues the opportunity to relate opinions concerning areas of sportsmen's  interests to the Division Heads as well as to the Seven Member Board.  In this way we can be heard at the highest levels.  This is part of the Club's Purpose in the bylaws concerning political alliances. But does this really work for our club?...

Last year the 220 acre marsh on the lower Chicopee River area was in grave danger from being closed by an "anti hunter" and the town's Alderman. Western Mass Duck Hunters members contacted League members who took action and called in dozens of needed  voices. We also called the Division of F&W and the Environmental police who took our side. All present considered this a form of hunter harassment. The town council backed down and even advocated hunting as a way to keep the nuisance goose problem in check. This was a major political victory for us! Keeping our alliance with other clubs through the Leagues is imperative to the future of our sporting interests.

Photos from the Mass. Sportsmen's Council 2015 Awards Banquet. (click on them to enlarge)